Kooringal Stud-bred Moon Stories really stands out in a crowd with his big white blaze and handsome looks.

But it’s more than the three-year-old’s physical presence that is grabbing the attention of the racing world.

Moon Stories stamped himself as an exciting stayer in the making with a barnstorming win at Sapphire Coast in late October.

Having only his second start, Moon Stories was stepping up from a debut third over 1200 metres to the 1612-metre journey.

“He is still very green and immature mentally, with plenty of improvement to come.

“When we did the mating I didn't really think we'd be getting a horse that can get over a trip and on type I would've said he looks more like a sprinter but the reports are suggesting he may well get a fair bit further yet.

“He seems very progressive and there should be some exciting times as we head towards the autumn.”

Moon Stories is from Tale Of The Cat mare Sea Stories and was purchased by Kooringal’s valued client Theresa Bateup (pictured), who is enjoying great success as a trainer from her Kembla Grange base.

Theresa races Moon Stories along with a number of syndicate members, while Kooringal retained a share in the son of Odyssey Moon.

Sea Stories is also the dam of Western Australian winner Not My Fight and the Victorian placegetter War At Sea.

“Divine Breath spelled at Kooringal in the autumn - putting on 56kg in seven weeks out and  strengthening up nicely - and has returned in great form,” Angus said.

The inaugural running of the feature event was won by long-time Kooringal supporter Tracey Bartley with Kiss Sum. 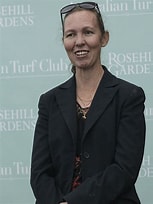