Another Magic win in feature race

Old marvel A Magic Zariz added another feature win to his remarkable record in the Narromine Diggers Cup (1300m).

The eight-year-old (pictured) stormed home to notch the 12th victory of his career on Monday (April 27).

As his name suggests, the bay is a son of former long-time Kooringal Stud sire Zariz.

The gelding’s dam A Magic Pick, who is by another former Kooringal stallion Magic Albert, was the winner of eight races from 800m to 1600m.

A Magic Zariz is the veteran of 42 starts and has finished in the placings on 24 occasions for $233,992 in prizemoney. 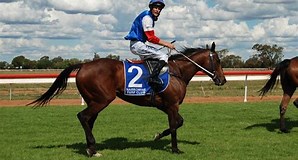